Posted by Neil Midgley at theGuardian on 6th December 2015 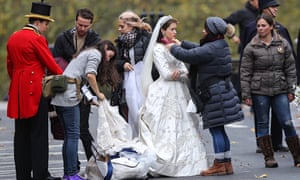 Claire Foy on the set of the Netflix series The Crown Photograph: JRAA/ZDS

American on-demand services are spending huge amounts per hour to poach viewers from the BBC, ITV and Sky – and, increasingly, they are spraying that money at the UK’s producers. First to these shores came Netflix, spending a reported £3m an episode for its epic royal drama The Crown. Amazon wasn’t far behind, hoovering up Jeremy Clarkson and his team for a reported £160m. And only last week, Amazon commissioned its first original UK drama, with an eight-episode order for haute-couture period piece The Collection. These are big plays, with potentially far-reaching consequences for Britain’s traditional channels and their traditionally scrawnier budgets.

“We have to provide something that is not normal telly – something that is going to surprise and delight our customers, and very often it’s different because it’s bigger,” says Chris Bird, film and TV strategy director for Amazon Video UK. “It’s bigger and it’s better and that’s going to cost you.” The Collection – a potboiler set in a Paris fashion house, soon after the second world war – will, says Bird, be “very, very ambitious in its scope – it’s going to look very prestigious, very glamorous”.

Though UK-produced, both The Collection and The Crown hope to emulate the success of the original online-only, big-budget drama – Netflix’s American version of House of Cards. Despite being less than three years old, that show has already proved a huge driver of Netflix’s lucrative expansion around the world. And that, in its turn, is a trick that other, more venerable players might happily repeat. “I want British drama to be the backbone of a more distinctive approach to all our services, capturing the public’s imagination with world-class work for a global stage,” said BBC director-general Tony Hall, when setting out his future vision in September.

That sounded suspiciously as if Hall was looking for the BBC’s answer to House of Cards. Indeed, it now has some very big-budget dramas in the pipeline – not least Andrew Davies’s six-part adaptation of War and Peace, which industry insiders estimate could be costing £2.5m an hour or more. But, says BBC controller of drama commissioning Polly Hill, her strategy is not to be more like Netflix.

“It’s to celebrate who we are and what we do,” says Hill. “It’s important to protect the shows that don’t need that investment. The important thing to the BBC is range, so we’re not constantly chasing huge budgets.” She acknowledges that War and Peace and upcoming John le Carré adaptation The Night Manager cost a lot of money – but cites Kay Mellor’s In the Club as a series that needs less. “We don’t start with that commercial conversation – the thing that shapes our drama is the freedom to make the boldest and most creative decisions with writers.”

At Sky, the business model falls somewhere between the BBC’s and Netflix’s: large audiences for individual shows are what drives advertising revenue and subscriptions. Sky Atlantic famously pushed the UK’s drama-budget boundaries earlier this year with the £25m Fortitude, and has recently launched another splashy drama, The Last Panthers, at the same time as Sky siblings in Germany and Italy. …