Posted by Jeanine Poggi at Advertising Age on 31st August 2015 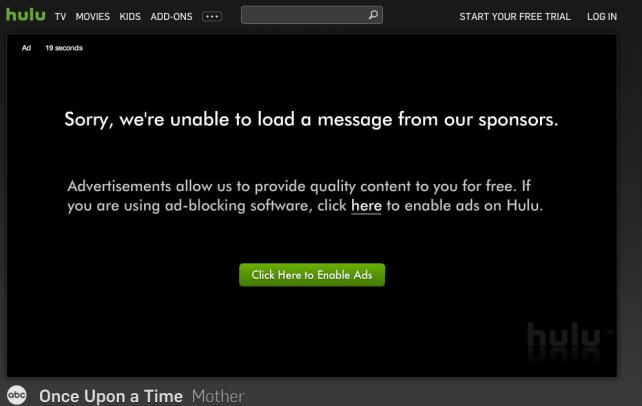 The rise of ad blocking online has worried marketers and web publishers alike, but even TV networks are having to confront the disruptive technology as it strips commercials from their streaming video players.

Consumers can install AdBlock software on their Chrome web browsers, for example, to eliminate both pre-roll and in-show commercials from full episodes of network shows on NBC.com, ABC.com and Fox.com.

There’s no clear indication of just how much video ad inventory is being erased from TV sites by ad blockers, but the threat is meaningful enough that networks are doing their own research and formulating game plans.

“It’s a very important issue and something we are looking at very closely right now,” one TV executive said. “We are currently running tests to see the impact on the digital business.”

CBS Interactive has been assessing ad blocking since “before it became a hot topic,” according to David Morris, chief revenue officer, CBS Interactive.

CBS.com began blocking the blockers in 2013, preventing visitors using the software from streaming episodes of shows. “This video is unavailable because we were unable to load a message from our sponsor,” the CBS player tells would be ad-blockers. “If you are using ad blocking software please disable it and reload the page.”

Consumers see a similar message if they try to block ads on Hulu, the service owned by Walt Disney Co., NBC Universal and Fox.

CBS Interactive sites fall in line with industry estimates for ad blocking more broadly, Mr. Morris said, with anywhere from 5% to 40% of users arriving with ad blocking software. And despite a crescendo of attention to the subject, the problem hasn’t become more prevalent for CBS sites this year. …