How the Mad Men lost the plot

The arrival of Facebook and Twitter appeared to threaten the advertising industry’s very existence. So what happened next?

Even admen have souls, and some of them are enduring dark nights. Jeff Goodby is co-chairman of Goodby, Silverstein & Partners, a San Francisco advertising agency responsible for some of the most famous campaigns of the 1990s, including ones for Nike and Budweiser. On his return from this year’s annual ad industry awards festival at Cannes in June, Goodby wrote a rueful piece for The Wall Street Journal. In the past, he said, the only true measure of success was whether the public knew and cared about your work. “You could get into a cab and find out, in a mile or two, whether you mattered in life, just by asking the driver.” Now, “No one knows what we do any more.”

Cannes, said Goodby, used to be a showcase for some of the most famous ideas in the world. This year, it felt more like a convention of industrial roofing specialists, discussing the latest in fibreglass insulation technology. Sure, there was ingenuity on display: content delivery systems, co-ordinated interactive installations. But when he got home and tried to tell friends from outside the industry what he had seen, they looked bored, even pitying.

An industry that used to compete with Hollywood is starting to wonder if it has become a colonial outpost of Silicon Valley. The prime spots on the Cannes beachfront this year belonged to Facebook and Google. A recent report from Accenture said that “marketing is so inextricably linked to technology that, by 2017, chief marketing officers are projected to spend more on information technology and analytics than chief information officers.”

Ten years ago, ad agencies thought they had hit on a new formula for success: move on from the blunt instruments of conventional advertising and embrace the laser-sharp selling tools of digital media. The industry’s about-turn was made partly out of an instinct for self-preservation, but also from a yearning to be aligned with the zeitgeist, in a world where glamour has migrated from Madison Avenue to Palo Alto. To some, however, it feels as if they have given up the ghost.

Goodby’s cri de coeur echoed the anxieties of others. In April this year, Giles Hedger, chief of strategy for Leo Burnett Worldwide, wrote a polemic for the industry’s UK trade journal, Campaign, bemoaning the domination of advertising by technology: “The belief that [the] marketing contract can be stripped of all its joyful subjectivity until all that remains between consumer and brand is transaction . . . is the fallacy of our time.” Hedger described his views as “heresy” but said he believed “the voices of sanity are growing around us”.

There is a schism in the church of brands. Ad agencies have fervently embraced the digital gospel. But by doing so, say the doubters, they lost sight of what made the industry valuable in the first place. 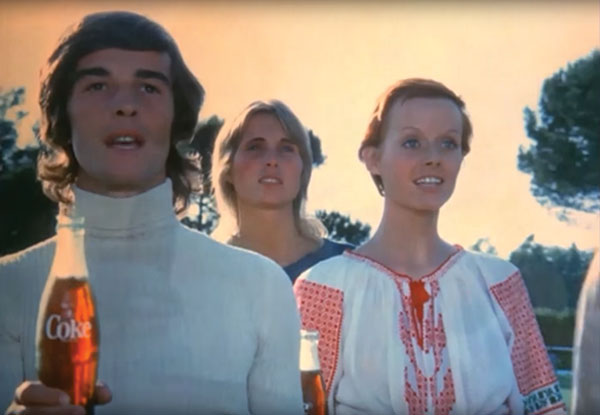 The series finale of Mad Men ended, fittingly, with an ad. A multiracial group of hippyish young people stand on a hilltop and sing a hymn-like song, while holding bottles of Coca-Cola. “I’d like to teach the world to sing”, which first aired in 1971, was the perfect ending to Mad Men for several reasons, but one of them is that it ushered in a new era of advertising.

Until the 1970s, advertising was regarded as a branch of sales. It was thought that ads existed to persuade the consumers you couldn’t meet in person of your brand’s unique attributes: Persil washes whiter. Then, Coke and others started to find success with ads that didn’t try to persuade anyone of anything. “I’d like to teach the world to sing” said nothing about how the drink tasted or whether it was more refreshing than its rivals. It simply lifted the heart a little and got everyone singing its song.

A mid-1980s Levi’s ad: the blend of sex, music and Americana made each new one a national event

From the 1970s onwards, the ad industry entered a creative golden age, making ads which millions enjoyed, quoted and sang. When I started in advertising in the 1990s, the industry was still confident. It had passed the point of peak hubris (which we can date to 1987, when the Saatchi brothers, bored one afternoon, tried to buy a bank) but it knew what it was for. We made famous stuff, and we made stuff famous. Every ad in the Levi’s campaign, for instance, with its combustible blend of sex, music and Americana, was a national event.

Early in the 21st century, the digital era arrived and the fame factory was repurposed. Big TV campaigns suddenly came to be seen as inherently inefficient and primitive. Finance directors, who had always regarded the money spent on advertising as suspicious — it seemed to work, but they couldn’t quite see how — seized the opportunity to hold ad agencies more accountable. Online, it was possible to measure exactly how many “impressions” an ad received, and (in some cases) which ones led to a sale. …