Netflix announces it will launch in 130 more countries

Posted by Ian Morris at the Guardian on 6th January 2016

Announced at CES, the move will make the streaming service available in almost every country, with the notable exception of China – for now 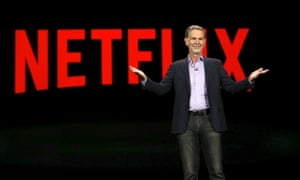 Reed Hastings, co-founder and CEO of Netflix, delivers a keynote address at CES about the expansion. Photograph: Steve Marcus/Reuters

Netflix announced Wednesday that it’s launching in an additional 130 countries, making the streaming service available in almost every country, with the notable exception of China.

Reed Hastings, the company’s CEO, said he’s hopeful it will launch in China in the near future. The company also pointed out that North Koreans won’t be able to access the wealth of western entertainment either – and Syria is out, too, due to US trade embargoes.

The service will largely be in English in the new countries, supported by subtitles. The company is adding Arabic, Korean and both traditional and simplified Chinese to the roster of 17 languages it already supports.

Even before today’s expansion, the company claims it’s in 70m homes worldwide. While Netflix might not have as many customers as a large US TV network, the firm can still claim to have more reach than almost any other traditional broadcaster – the exceptions being news outlets and YouTube. …