Posted by Mark Sweney at the Guardian on 19th May 2016 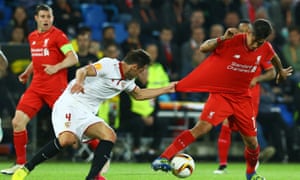 A near record number of football fans discarded their TV sets to catch the Europa League final on YouTube, but despite its success the web giant has scotched the idea that it wants to challenge Sky and BT for Premier League rights.

BT Sport struck a deal with Google-owned YouTube to air the Europa League final, and upcoming Champion’s League final, alongside its own mix of coverage on pay-TV and free-to-air channels.

BT’s TV coverage, broadcast free-to-air on Freeview as well as on pay-TV, drew a record peak audience of 3.5 million viewers.

YouTube’s coverage of the final is thought to have attracted at least the high hundreds of thousands of viewers, potentially as high as one million-plus, according to one web analytics firm that monitored the broadcast.

For YouTube it would be one of its biggest-ever UK audiences to a sporting event and it is believed to be in its top five most-watched live sports broadcasts in the UK.

“It is amazing that BT has chosen to put the Europa and Champions League finals on YouTube to reach the widest possible audience,” said Stephen Nuttall, YouTube’s senior director for Europe, Middle East and Africa.

“Live content works brilliantly as a complement to [TV coverage] for a broadcaster running a very good YouTube channel. Some partners think how much ad revenue can I make on it. Some think about what reach they can get to grow and build a domestic or global audience.”

It has been speculated that if YouTube’s two live broadcasts are a major success – the Champion’s League final will air on 28 May – then the web giant will consider challenging Sky and BT in the next £5bn-plus Premier League rights auction.

Nuttall scotched the idea that YouTube would look to make a bid, arguing that it is a technology company happy to act as a partner to broadcasters and content creators.

Originally posted by Mark Sweney at the Guardian
19th May 2016