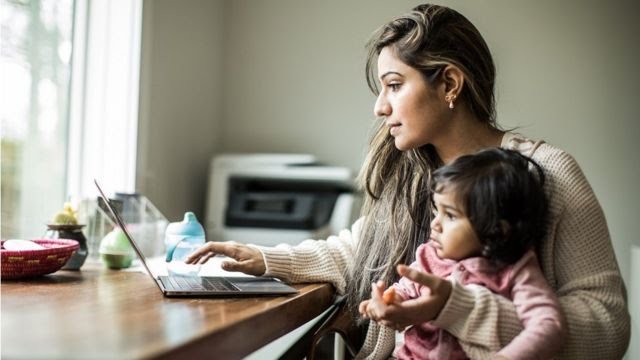 UK adults spent an average of three hours and 47 minutes online every day during the pandemic, an annual survey of media habits by regulator Ofcom has found.

That was over an hour longer than adults in Germany and France.

In addition, online shopping sales in the UK rose by 48% to £113bn, with food and drink sales rising the most.

Ofcom said the Online Nation 2021 report revealed how the pandemic had accelerated a shift to online.

In a year when many had to find what entertainment they could at home, gaming saw a big increase with half who played telling Ofcom it helped them get through lockdown.

Communication at work and at play also changed as workplaces closed and travel was restricted.

“Zoom had extraordinary growth – from a few hundred thousand users in the first two months of 2020 to more than 13 million in April and May,” the report said.

The report found many people were glued to their phones. Mobile apps cost British people nearly £2.45bn with most going on Tinder, Disney+, YouTube and Netflix.

Young adults aged 18-24 more than doubled the time they spent on the short-form video app each day, from 17 minutes to 38 minutes in September 2020.

And, as the High Street was forced to close, online sales rose by almost half.

Half of adults said that news and information was a big reason they went online – but they often encountered misinformation.

Some 46% of UK adults who looked for information about the pandemic said they had found misleading or untrue information.

Among the most commonly shared falsehoods in the first quarter of 2021 were that face masks offered no protection or caused harm, and that the number of deaths linked to coronavirus was much lower than reported.

The report found that “adults are as likely to use social media to find information about the Covid-19 pandemic as they are to use news sites and apps” with Facebook the main source. However, only 16% who used Facebook for information about Covid-19 said they trusted it as a source. …