Posted by Stuart Dredge at the Guardian on 12th October 2015

Users of the social networking service are watching 370 years of video a day, while talkshow hosts seem to be getting the bug for live-tweeting 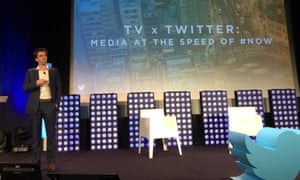 Twitter’s Dan Biddle presenting at the Mipcom conference in Cannes Photograph: Stuart Dredge for the Guardian

“I had a moment when I was talking about quantum television,” said Dan Biddle, Twitter UK’s director of broadcast media partnerships, as he perched in a meeting room shortly after his company’s keynote at the Mipcom conference in Cannes.

“It was this sense of where TV used to be seen as a wave where you just sit and it crashes over you for an hour and you’re consumed, now there’s a sense that it’s actually made up of particles, like light.

“And each one of these particles can become a bigger moment on Twitter, on social, because everybody will gather around that, and it will be talked about and referenced again and again.”

There have been plenty of those moments for Twitter in the last year, from political debates to Bake Off bread lions. And while Biddle’s own quantum moment may not have lasted long enough to make it into his keynote, it’s a useful primer on the way Twitter wants to be seen by the TV industry.

Like Facebook, Twitter is love-bombing the TV industry in the hopes of getting broadcasters and producers to help drive more conversation around their shows on the social networks – not to mention spending more money on ads to attract new and lapsed viewers to those programmes.

Yet Twitter has become a broadcaster of sorts itself: its 316 million active users currently watch 370 years worth of video every day on the service. That viewing is up 250% in the last six months alone, with 90% of it happening on mobile devices.

That’s giving Twitter a better idea of what kind of videos its users like best. “They like shorter clips – 30 to 45 seconds – and we also know that it should be something that people will want to share with each other,” says Fred Graver, creative lead for Twitter’s global TV team.

Native video is growing strongly for Twitter, although direct comparisons with Facebook are tricky due to the difference between their milestone metrics. Twitter uses watch-time, with that 370 years of daily viewing meaning roughly 18 minutes for each active user a month.

Facebook quantifies its video growth by “views”, with its 4bn daily views translating into about 80 views for each active user a month. Suffice to say, both are growing rapidly.

For now, native video on Twitter tends to be about clips, whether uploaded by broadcasters and TV stars or by users. Both Biddle and Graver see potential for original shows – as in super-shortform formats made for Twitter – in the future.

“This will come from the creative community. They’ll be like ‘OK, now that we have all these tools, what is a quote-unquote ‘show’ on Twitter?” adds Graver.

Developing relationships with the YouTubers who’ve developed their own shortform shows on Google’s video site may help, although Twitter also hopes it can become a conversational channel for those formats too, according to Graver’s anecdote about his trip to the YouTuber-packed VidCon conference earlier in 2015.

“There was a panel when they were literally saying ‘Well, the comments section on YouTube doesn’t work any more, so I talk to my audience on Twitter’,” he says.

“Some of them even do a thing now where they release their video [on YouTube] and then tweet out ‘Just put my video up, let’s have a viewing party in an hour on Periscope: watch it with me!’ So they’re using Twitter to light the spark and get the conversation going.”

Ant and Dec are among the TV stars to have used Periscope:

Periscope’s role in that evolution looms large in the conversation. Twitter’s live-streaming video app launched earlier this year, with 40 years worth of Periscope video now watched every day according to Biddle, who is keen to talk about its use by TV stars from Ellen DeGeneres to Ant and Dec.

“You have the audience in the palm of your hand, and those are the best Periscopes: the ones where this person has taken you with them and chatted to you in that very intimate way. It’s not the best quality video in the world. The point is it’s a visceral experience” he says.

“It’s very much a ‘now’ experience. And in the case of TV, it’s often those connecting moments that let you behind the scenes: like when Ant and Dec did it before the Britain’s Got Talent finals. ‘Oh, the music’s on. We’ll see you on TV!’. That last line had that ‘this is a moment that we’ve had before we go to the mass moment of television.”

Originally posted by Stuart Dredge at the Guardian
12th October 2015